If you are using a typical computer desk, your cabinet is most likely placed underneath and sometimes completely hidden from view. In such an arrangement, you aren’t able to see the hard disk LED unless you bend your torso over by the sides of the chair and manage to get your head under the table, ignoring the pain caused by the armrest jabbing at your rib cage … ouch! Don’t hurt yourself trying to get a view of the blinking LED. Try these three different freeware programs instead, that will move the HDD LED to three different and convenient positions.

Keyboard HDD LED (0.5 MB) is a simple program that will turn the Scroll Lock LED on the keyboard, which is usually unused, into a hard disk activity indicator. The program consist of just one executable file which keeps running in the system tray and synchronizes the blinking of the hard disk LED with the Scroll Lock LED, so you don’t have to constantly crawl under the desk to check it. Of course, you need to have the Scroll Lock LED turned off for this to work.

FloatLED (278KB) places an array of blinking lights, one for each drive or partitions, on a floating thin horizontal strip that can be dragged and placed anywhere on the screen. The most appropriate position is at the top, over the title bar. No tray icon, no registry entries and other crap, and extremely light on memory and CPU usage.

Hard Disk Indicator (180 KB) is another small program that add’s the hard disk LED to the system tray. The program is somewhat limited because it can monitor only up to five partitions on the same hard disk. 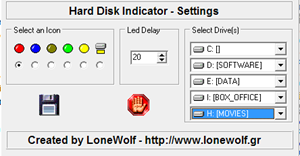