The Windows Task Manager is the tool that comes up when we give the famous three-finger salute (Ctrl+Alt+Del) to end a troublesome process or application. In the old days, it used to reboot the computer but in modern Windows system it brings up a more useful Task Manager. The task manager allows us to monitor running programs, processes, or threads and kill them if the need arise. The task manager is indispensible when you are troubleshooting any application. So why not look at some better tools that help us to get more information about the processes?

1. Process Explorer: This is the most popular replacement to the Windows Task Manager. Ask anybody and this is first tool they would recommend to you. Process Explorer is a free program created by Sysinternals (and later acquired by Microsoft) which is a great tool for system monitoring and debugging software.

2. DTaskManager is another good Task Manager replacement with an interface similar to Windows Task Manager but with lots of additional functionalities. Here is brief description from the publisher:

3. MKN TaskExplorer is an advanced process management tool that shows detailed information about each process, including performance and memory graphs, DLLs loaded, threads, and access token. It also shows the information about the handles opened by a process and provides a function to read processes’ virtual memory. 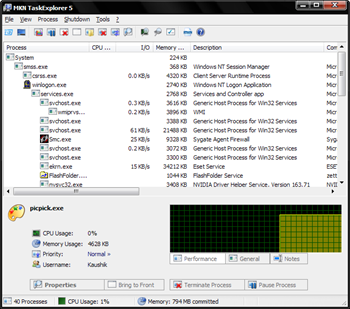 TaskExplorer provides a function to stop and resume the execution of processes. There is an option where you can even force a process out of the physical memory. It can also stop, resume and terminate single threads in processes and can create a stack trace for each threads, which can be helpful for debugging purposes. 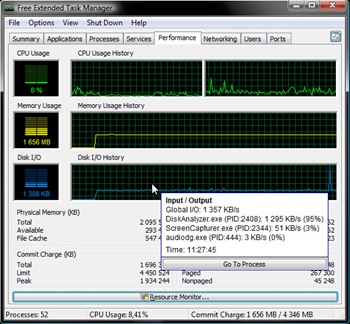 5. AnVir Task Manager is more than a task manager – it’s a Swiss-army knife for your operating system that allow you to control, optimize and defend all the processes that occur on your PC. It includes a process and startup manager, spyware removal tool, performance tweaker, processes, services and DLLs, drivers manager. 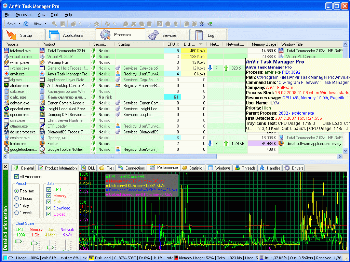 From the system tray, you can view CPU usage and disk load, quickly access the last launched programs, change process priority or permanently block undesired processes. It’s a good program but with a horribly cluttered interface which has almost ruined this application. If we could only tone down it’s interface and the colors this would have been a fine tool.