There is a significant increase in the amount of phishing attacks on Facebook, and why not? A social network with 750+ million gullible and click-happy users is the best place for phishers to throw their nets than hack into some database or setup a botnet. That hilarious Obama video and the leaked Miley Cyrus sex video your friends were posting about on Facebook can only lead you to the loss of your Facebook account, your email account, your bank account and who knows what?

Keeping oneself protected on Facebook, or for that matter, on any website requires just little bit of sensibility and awareness. But humans are fickle and idiocy profound, which is why we need tools such as malware scanners to tell us which links are bad and which ones safe to click. We have already seen anti-malware browser plug-ins such as BitDefender TrafficLight and G Data CloudSecurity that does this.

BitDefender Safego is another malware scanner designed especially to keep users protected on Facebook. BitDefender Safego uses the BitDefender antimalware and antiphishing engines to scan URLs in the cloud, based on a blacklist of untrusted web sites and on heuristic detection. 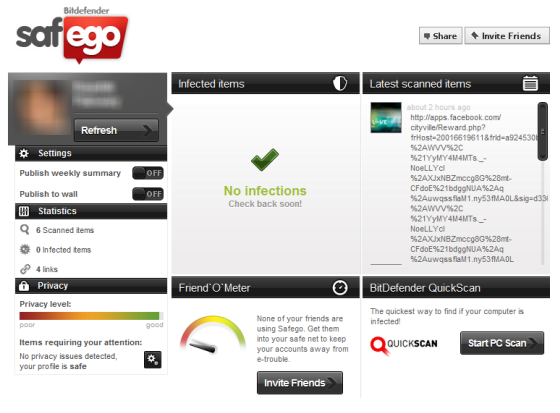 BitDefender Safego is not a browser plug-in, rather it’s a Facebook application, which ensures that protection is always with you no matter which browser or computer you use to access Facebook from.

After authorizing the app, BitDefender Safego automatically scans the content posted on the users’ Facebook Wall and News Feed for bad links. It looks into your friends’ links, messages, and apps you have installed. If malicious links are found Safego lets you know. Items that are identified as malicious have a button next to them so you can warn the friend that posted the offending message.

A BitDefender Safego dashboard shows you at a glance the most recent posts that have been scanned, the number of malware identified, as well as a meter that judges how secure your account’s privacy settings are.

Among all Facebook apps, I think BitDefender Safego is one of the most useful ones to be developed. Go install it.