Broken Telephone or simply ‘telephone’ is a kids game, in which one kid whispers a short sentence to another kid, and that kid turns and whispers it to the kid sitting next to him. This goes on until the message is passed through dozens of kids and by the time the message gets to the last kid, it’s a so different from the original message that it has everyone laughing hysterically. The game has no winner: the amusement comes from comparing the messages with one another. Broken telephone is played around the world and is known by various names in different parts.

Sometime back, I wrote about an online version of the telephone game called Broken Picture Telephone. The online variant is slightly different from the original game. Since you can’t whisper to an online participant and passing the message by typing would kill the very purpose of the game, in Broken Picture Telephone, the message is passed around using pictures and text, altering between the two. You either receive a message in drawing or in text (done by the previous player) which you have to draw using rudimentary drawing tools or describe what you see, depending on whether you receive a picture or text. The message gradually starts deviating from the original as players struggle to get it into a drawing or try to decipher what the previous player drew.

Unfortunately, Broken Picture Telephone is no longer available. If you visit the site you can see a message from the developers promising the return of the game. Drawception is a new game that has come up to take the place of Broken Picture Telephone. The game completes once 12 unique players have participated. Completed games can be browsed and viewed by anyone without logging into the site. And oh, you can login using your existing Google, Facebook, Twitter or Yahoo account, so that is one step less between you and your game. 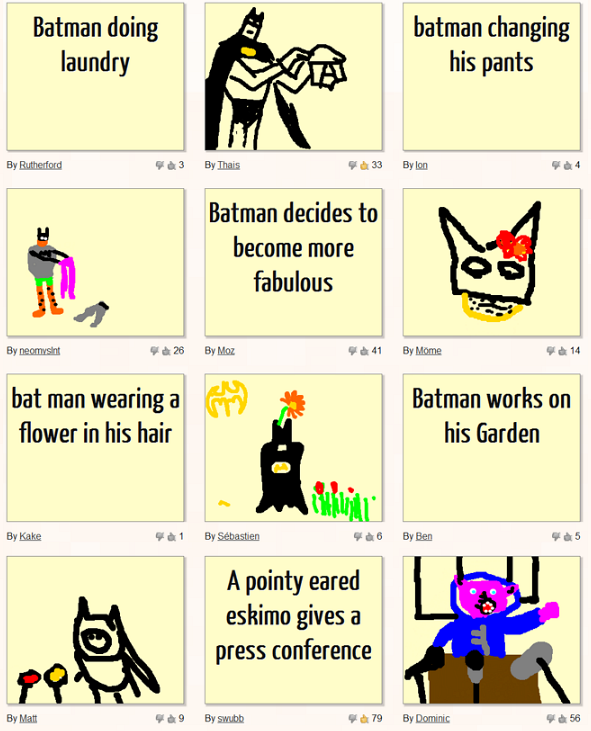 Players can rate and vote games as well as the gamers. Coincidentally, the highest rated game currently on Drawception is titled Inception, and the results of this particular game is the most stupefying of all.

Browsing through the completed games is such a delight. White boys trying to be Asian women in Africa went awry right from the start. In Batman punching the Easter Bunny, one bad interpretation ruined the entire game. All glory to the hypnotoad made a remarkable recovery towards the end, and in Sexy old lady one mistyped character changed the entire game.

There are other telephone games such as Teledraw, DoodleOrDie and Picturetelephone, but only Drawception is as good and as active as Broken Picture Telephone.