Recently, the Dev, Canary and Beta channels of Google Chrome started blocking installation of extensions originating from outside the official repository, that is, the Chrome Web Store. Attempting to install extensions from third party website produces a notification message that says “Extensions, apps and user scripts can only be added from the Chrome Web Store”. As noted in the message, Chrome also disallows installation of user scripts, which are almost always third-party. This is not a good thing for users wanting to install Greasemonkey scripts or Stylish scripts or any other type of scripts.

Installation of off-store extensions were always blocked in Chrome to protect users from malicious scripts and extensions. But previously, users could click on a link to a *.crx file, and Chrome would offer to install the file after a few warnings. Starting in Chrome 21, it has become more difficult to install extensions, apps, and user scripts from outside the Chrome Web Store. By default, all extensions outside the Chrome Web Store are blocked and can only be installed by dragging the downloaded .crx file onto the Chrome Extensions page.

In order to install off-store extensions, the user must download them to a directory and drag them onto the chrome://extensions/ page, which is the same page that opens when you click Extensions under the Tools menu. 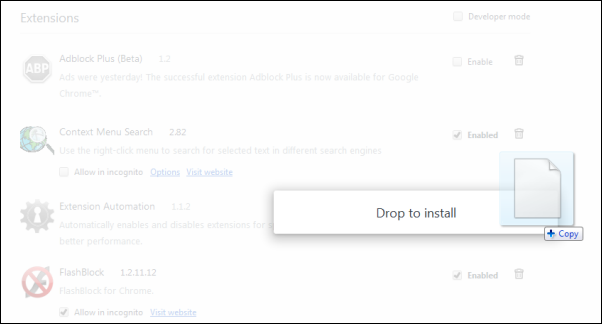 Once you drop a downloaded extension (.crx file) to the Extensions page, the installation will begin as usual.

GHacks shares another way to force Chrome into accepting extensions and scripts from third party websites. This can be done by launching Chrome with the parameter –enable-easy-off-store-extension-install.

To add the startup parameter, right-click on the Chrome shortcut in your desktop and click on Properties. In the target filed, append the path with the above parameter. Notice the space before the two dashes. 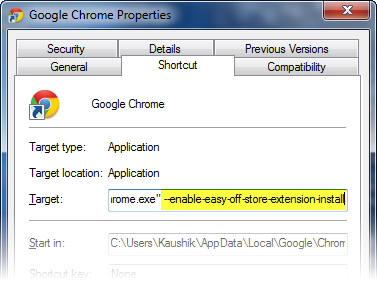 When you start Chrome using this shortcut, you should be able to install extensions and userscripts from third party sites as before.