If you haven’t already noticed, Windows 8 no longer supports Sidebar and Gadgets. These were deprecated in favor of Start Screen apps and Live Tiles, even as users argue that both are different things. Gadgets were initially supported in Windows 8 Consumer Preview and Release Preview, but now that Windows 8 has been released via MSDN and Technet, users have discovered that they have been entirely removed. However, it is easy to bring back this functionality in Windows 8.

Simply download the files referenced on this forum thread, extract the contents of the 7z file and copy them to WindowsSystem32 folder. Then run Install.bat as Administrator (right click > Run as Administrator). This should install sidebar.exe, the process that runs the gadgets and all associated files.

Right click on the desktop and you should see the Gadgets menu entry on the context menu. Clicking on it will launch the Gadgets gallery. 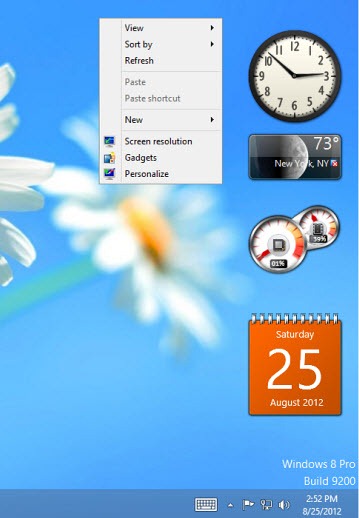 Introduced with the launch of Windows Vista, gadgets are still very popular among certain section of users because of their usefulness (weather and calendar at a glance, for instance) and for their entertainment value. Over the years, the gadget library at Microsoft’s website has been growing steadily owning to the support of internal developers and third parties. But recently Microsoft did a house cleaning and removed all but 29 of the most popular and highest rated gadgets the company considers "Greatest Hits".

Microsoft also no longer supports uploading of new gadgets. For gadget developers, Microsoft points out that they can now "use your HTML5 and CSS3 skills to build Metro-style apps for Windows 8 Release Preview.”

Soon, even Windows 7 and Vista users will lose their Sidebar and Gadgets as well.

In a security advisory released last month, Microsoft announced that it has released a fix that will disable the Windows Sidebar and Gadgets on supported editions of Windows Vista and Windows 7. Microsoft insists that the move is the the best interest of the users, as vulnerabilities in gadgets can allow remote code execution. Currently the fix needs be downloaded manually, but there is a possibility that Microsoft might push the fix to all users through Windows Update.