KolibriOS is a piece of programming marvel. An entire Linux distribution Operating system, and not just a blinking cursor on a terminal, but with a graphical environment complete with text editors, system utilities, games, browser, media players and lots of other stuff. All neatly and impossibly stuffed inside a meager 1.44 MB floppy disk. 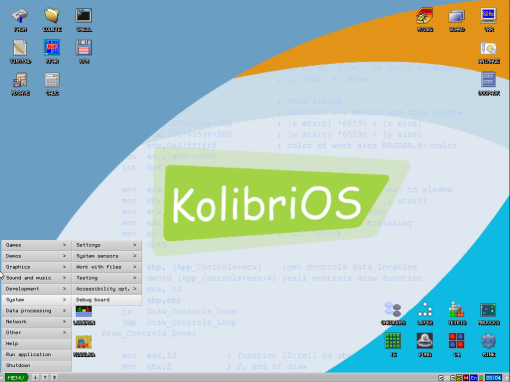 I tried KolibriOS on Virtual Box. The system boots in 2 to 3 seconds and shuts down instantly, like turning off a light bulb. The graphical UI is dated, reminds me of Windows 3.1 era, but I won’t be too critical. After all they have squeezed an entire distribution under one and a half Megabyte, for god’s sake. All I want to say is the graphics is non too bad and pretty usable if you don’t mind compromising.

The distribution comes in two version – a floppy image and a disk image. The disk image is slightly larger than the floppy version at 3MB, but still incredibly small. There is no mention of hardware requirement anywhere on the site, but I guess it would run any antique piece you can find.