Backup Box isn’t complicated to setup either. The service just requires you to give them permission to access your Dropbox and FTP accounts and files can be transferred from one place to another without downloading them to your computer. Backup Box will move your files from the source to the destination using Amazon S3 as an intermediary place to store files. The files are encrypted before putting them on Amazon, and once the transfer is completed, the files on Amazon’s server are deleted. 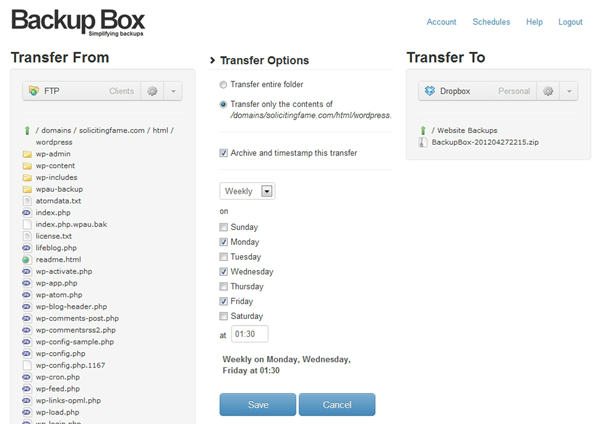 Aside from files and folders on an FTP drive, you can also transfer MySQL databases. Lots of additional sources are planned for the future such as Google Drive, PostgreSQL, MongoDB, Box, SugarSync, Email Flickr, Google Docs and GitHub. You can choose between which directories on either side the transfer should take place. Scheduling is allowed.

The free accounts are bit restrictive though. You get only 1GB of transfer per month and not more than 10 transfers per month. Paid plans start from $10 a month.