Aperture, shutter and ISO value – three different parameters that control a single aspect of your camera, the amount of light entering through the lenses or the brightness of the pictures, in terms of the end product. For casual users, these terms are irrelevant since they are more likely to use a point and shoot camera that auto adjusts the aperture and shutter speed for each shot. But to get that perfect shot with just the right amount of light you might have to override the automatic settings and take control over the camera. Most digital cameras, even the point and click ones, allow you to do so.

Camera Simulator gives you an interactive visual demonstration of the relationship between these three vital camera setting. The simulator has three sliders for the three parameter which you can adjust and see it’s effect on a test image. 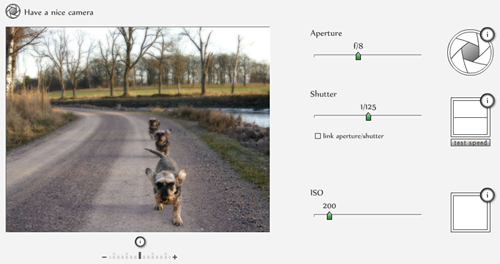 It let’s you determine the exact shutter speed required for any given aperture value and vice versa. For instance, if you want to shoot a moving object, you will have to increase the shutter speed to avoid motion blur and at the same time increase the camera aperture to allow as much light as possible during the reduced exposure time. The question is: by how much? Camera Simulator will help you gauge it.

When you move the aperture slider to the other extreme (f/32), i.e., make the aperture large, the depth of field becomes large and the background comes in focus. But it also prolongs the exposure time resulting in motion blur on the dog. This is very nicely done.