About two years ago, with the release of Google Earth version 5.0, Google introduced historical imagery that allowed users to traverse back in time and study earlier stages of any place. This feature was added as a layer, like so many other features, and needed to be enabled on Google Earth’s interface in order to see. But this article is not about Google Earth. It’s about a website that allows you to view historic aerial photographs just like the way you do on Google Earth, but online and without having to install Google Earth.

No Google Earth? No problem

HistoricAerials.com is the site I’m talking about. This website contains a surprisingly large database of aerial photography dating back to the dawn of aviation, with a Google-Maps-like interface. Historic Aerials has aerial photography taken from the 1930s through today – a better part of a century – and photographs that predate satellite imagery upon which tools like Google Earth, Google Maps, Bing Maps etc. flourish. 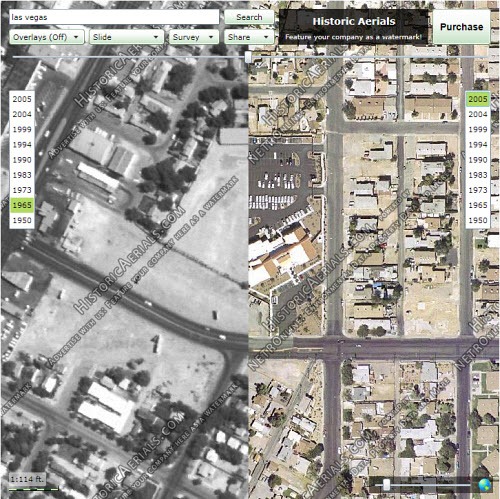 At Historic Aerials, there is a search box where you can enter name of a location or a street address to view aerial photo of the place. The years for which images are available are listed in little boxes on the left. A slider at the bottom allows you to zoom in and out of the image. This works pretty much like in Google Maps. Depending on which area you are looking at, you can get to see images as early as 1930 and from various heights (the zoom slider).

The interesting part is the compare tool which lets you choose two different dates and compare photographs of the area. This you can do by either using the slider compare tool, which splits the image into two halves with both halves showing image from different dates, or by using the dissolve compare tool that fades one image to the other by way of using a slider. Both are fascinating to use.

Often times the pictures tell a dramatic story. In one such example, until the 1950s the suburbs of Washington, DC had rows of vintage buildings from the 18th and 19th centuries. Then it was decided that the city’s residents should all live skyscrapers and completely bulldozed entire quadrant of the city in anticipation of that goal. 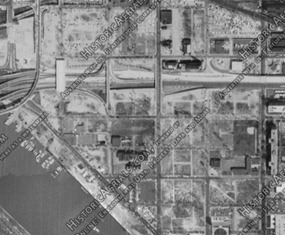 A bit of history

Aerial photography was first practiced by the French photographer and balloonist Gaspard-Félix Tournachon, in 1858 over Paris, France. Early aerial photography was possible using balloons. With the invention of the wonderful flying machines at the turn of the century, cameras were started to be mounted on aircrafts. The first semiautomatic aerial camera was designed in 1911 by the Russian military and was exclusively used during World War I.

With the advent of inexpensive digital cameras, and easy access to both private and commercial aircraft, aerial photography has morphed into a hobby for many people.