There are lots of myths and confusion surrounding Windows page file, for instance, this utter rubbish "thumb rule" that the page file should 1.5 times the amount of physical memory. Then there is the question of whether to use the page file at all. The page file is intended to serves as a substitute for physical memory, the RAM. In early days, when RAM was expensive it made sense to allocate a major portion of the system’s memory requirement to the page file, to reduce cost. Today, cost is no longer an issue. 2 GB RAM has become the standard for every new PC. With so much memory available is there any logic to use the page file?

Why you should turn off the page file?

The problem with Windows is, no matter how much physical memory is installed on the system, it will always use the page file constantly swapping data between the RAM and the hard disk. Every time the page file is accessed, the elaborate system of sliders, arms, actuators and motors inside the hard disk are stirred into action. The spindle rotates and the arm moves repeatedly to and fro over the platters reading and writing bits of information on the hard disk. All throughout a session the operating system uses the page file thousands and millions of time! Look at the screenshot below, under the Page Fault column. Those figures indicates the number of times the page file was accessed. 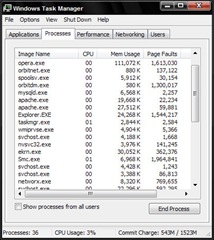 Now, you don’t have to be a rocket scientist to realize that the more you use a device the less the period of life the device is going to have. This is particularly true for mechanical devices, devices that have moving parts, like the hard disk. Due to friction between various parts and stress from continues usage a hard disk wears out. This is the reason why hard disk and optical drives failure is so common while motherboard or processors rarely fail because of the absence of mechanical parts.

Disabling the page file will significantly reduce the wear and tear the hard disk suffers, and will extend the life of the hard disk. Besides, unused RAM is wasted RAM. What is the use of having GBs of memory only to leave it idle? Of course, you must have sufficient amount of RAM on your system to disable the page file. How much RAM is sufficient depends on the usage of your computer. If you have anything more than 1 GB, you can turn off the page file. If you feel that your computer might require more than the amount of RAM you have, then instead of turning of the page file set it to the minimum value of 2 MB. If the memory usage suddenly shoots up Windows will automatically increase the size of the memory temporarily. You won’t be able to eliminate page file access completely if you set a value, though you will be able reduce it.

Regarding change in performance, you won’t notice a difference. I have turned of the page file on my computer and it feels good to know that my hard disk is not thrashing.