Bug Shooting is a free screenshot capturing utility with many advanced features. Firstly, there are three different screen capturing modes – (1)Capture screen, which captures the entire screen as well as the active window at the same time, (2) Capture area, which captures only a selected area of the screen and (3)  Delayed capture, which captures automatically  after a delay. This method is especially useful to capture a menu.

Bug Shooting also has a built in image editor. Now, it isn’t too advanced but sufficient for screen capturing purposes. The standard drawing tool box enables you to add annotation, arrows, texts and make all sorts of shapes and markings. The type of things a blogger or developer usually does before posting it on the Internet or sharing with friends. The best part is, every mark you make on the screenshot are stored in separate layers thereby enabling you to edit or remove it later. Cropping, magnifying and flipping the image is possible from within Bug Shooting. 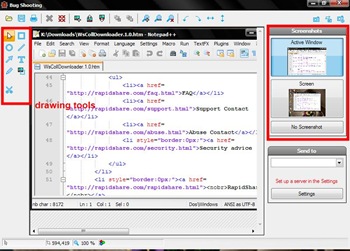 Another interesting tool is the "create image". With create image you can copy a part of the screen and duplicate it, then further highlight it by adding a dotted line around it.

Bug Shooting also allows you to directly upload the screenshot to a web server or to any external program like your email client, if you wish to mail it to someone or Photoshop for further image editing.