A simple, neat program called Hot Corners allows you to assign four different actions to the four different corners of the screen. When you move the mouse to these corners, the action assigned to it will be triggered. These actions can be anything from launching application, files, folders, a bookmarked URL, the Control Panel, showing the desktop and a whole lot of possibilities.

I came across this program when it was still at version 1.1, some months ago. I immediately liked it, but my anti-virus program gave me a warning. A search on Google revealed that many users had the same issue. Being unsure, I dropped the program. Recently, I learned that a newer version of Hot Corners, version 2.2.2.0 has been released and the false warning problem ironed out. This new version is much better and includes another feature, called Mouse Move, which is a sort of mouse gesture. 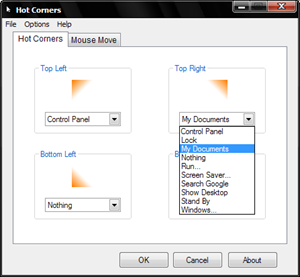 Using a key combination of Win+X and moving the mouse pointer in four different direction (left, right, up, down), it’s possible to assign another four set of actions. When the program is running, pressing Win+X positions the mouse pointer at the center of the screen. Then you have to move the mouse in one of the four directions to perform the associated action. It’s a little quirky but it does the job. The Hot Corners Delay and Mouse Move Sensitivity settings allows you to fine tune it’s performance.