Yesterday Google announced the release of Ancient Rome 3D, a layer for the popular Google Earth application which allows users to explore the historic city as it stood on 320 AD.

Through this layer, a user will be able to view a virtual representation of the city in 320 AD at the height of its development as the capital of the Roman Empire, fly around the city to view more than 6700 historic buildings and zoom into eleven ancient structures, such as the Colosseum, to view the detailed interiors. Using this layer, a user can also learn about Ancient Rome through information bubbles written by historians. 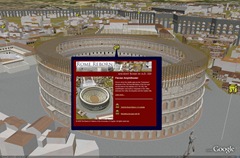 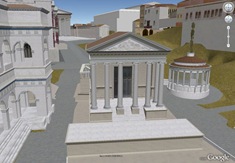 Within the Ancient Rome 3D layer users can visit the Roman Forum, stand in the center of the Colosseum, trace the footsteps of the gladiators in the Ludus Magnus, stand on the Rostra, swoop over the Basilica Julia, fly under The Arch of Constantine or even examine the detail on the facade of the Basilica of Maxentius.