Want to get Chrome’s look and functionality in Firefox? Here is what you will require –1) Chromifox theme and 2)Total NoChrome addon for Firefox.

Chromifox, called “coat of Chrome for Firefox”, is a bright and soft blue theme for Firefox 3 on Windows, Linux, and Mac OS X, inspired by the appearance of the Google Chrome web browser. Chromifox gives Firefox the almost Chrome like appearance except the tab bar and title bar which is fused into one in Chrome. This is fixed by another addon called Total NoChrome. 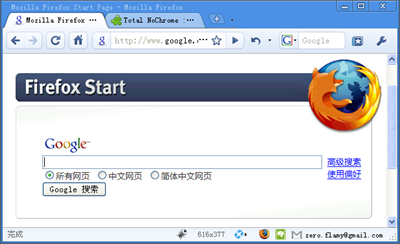 Total NoChrome is a modification of the Total ReChrome addon which places the tab bar at the top and changes the appearance of the title bar  bringing it closer to the Chrome look.

That will take care of the looks. Now for the functionality. To get Chrome’s features in Firefox, get the following extensions.

1. Stealther or Distrust for incognito mode or private browsing. Private browsing is available in Firefox 3.1 Beta 2 though. (Original post)

3. Speed Dial to fill up the empty tab page with thumbnail to your favorite bookmarks. You can also try Auto Dial that displays the most frequently visited pages. (Original post)

5. New Tab Button on Tab Right to put newly opened tabs next to the parent tab.