Frozen computers is something we have all experienced from time to time. You are working with some application or browsing the web when suddenly you find that your computer has stopped responding. You try to bring up the task manager with the most famous key combination CTRL+ALT+DEL. If it comes up, you are lucky. You can terminate the offending process and probably save yourself from resetting your computer. But sometimes the system is so busy that even the task manager does not show up. Everything is frozen.

This is where AntiFreeze might be able to help you. AntiFreeze is a utility that sits on the system tray, waiting for you to press the hotkey combination (ALT+CTRL+WIN+HOME by default) in the event of an emergency, i.e. your system becomes unresponsive. As soon as you press the key combination, you will hear a beep indicating that AntiFreeze has taken over your system. It will then suspend most of the running programs, except the critical ones, so they stop hogging your systems resources. AntiFreeze then launches their own task manager, allowing you to terminate the processes which brought the system down and hopefully recover your computer. 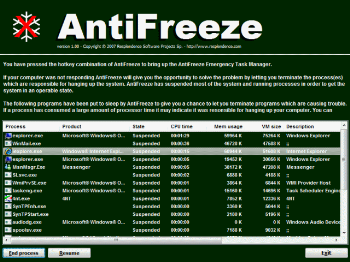 If your computer becomes unresponsive because of a hardware problem or the mouse cursor is not updated when you move it or some piece of kernel software or device driver is busy at an elevated priority level then AntiFreeze is not likely to offer you a solution. A good indication when AntiFreeze might work is when the mouse is moving but the applications are unresponsive. If the mouse isn’t moving, the reset button could be the only solution.

AntiFreeze should be used only when everything else fails. DO NOT try to invoke the application to test while you have unsaved work running, because it will suspend all running processes and all your open windows and applications will stop working.