I have brought to you a number of application launchers in the past (look at ‘Related’ at the end of the article). Here is another one to add to the kit. Appetizer is an attractive, small dock for Windows that holds the shortcuts to your most frequently used programs. Additionally, the application also supports the PortableApps USB format. So if you use Appetizer on a USB key in the PortableApps format, the application will detect it and automatically import all your applications along with the ‘Documents’, ‘Videos’, ‘Music’ and ‘Pictures’ folders.

Appetizer’s interface is skinable and supports drag and drop, where you drop the links to any application or folder on your system to create a shortcut. You can also organize them into groups if necessary. The program’s customizable keyboard shortcut allow you to quickly hide or show the menu with a single keystroke. 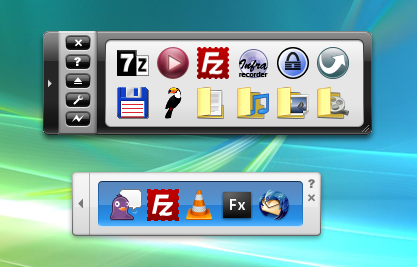 You can add links to any program or folder, including special system locations such as My Computer or the Control Panel. The most useful feature is that you can directly import shortcuts from the Windows Start menu or the Quick Launch bar, allowing you to use it right away without having to spend too much time on configuring it. Another special tool in Appetizer is the Multi-Launch group, which enables you to open several applications and folders simultaneously.

Appetizer is worth a look.