Have you ever wondered what would happen if a nuclear bomb goes off in your city? Not many people brings such pernicious thoughts to their mind, but apparently the guys at Carlos Labs does. Using a mashup of Google Maps and Javascript they have created Ground Zero – an online tool that lets you visualize the extent of destruction a nuclear bomb can inflict on a city of your choice. Cool and sinister!

You can choose up to 8 different nuclear bombs including an asteroid impact. The power of the explosion ranges from the one used in Hiroshima in 1945 during World War 2 – the 15 KiloTon “Little Boy” to the most powerful explosion in history – the 50 MegaTon “Tsar bomb”, a Hydrogen fission bomb tested by USSR during 1961.

The following simulation shows what will have happened if “Little Boy” was detonated over New York. 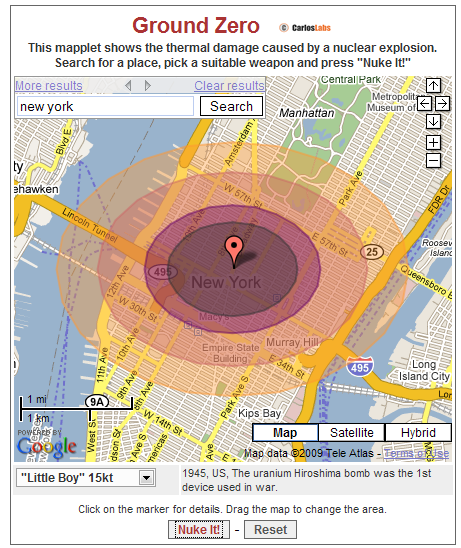 Using iframe code, you can embed Ground Zero on your website too, like I have done below. Drop a bomb on your city and find out what happens.

Related: How to watch a nuclear explosion