The Windows 7 interface is so much different from it’s predecessors that it is hard for any transformation pack to give an earlier edition of Windows the same look as Windows 7. It was different with Vista. There are at least half a dozen tools that can change Windows XP’s interface to Vista, almost deceptively. But Windows 7’s superbar turned out to be a big problem for skin designers – nobody was able to come close.

Here is another “attempt” to bring Windows 7’s look to Windows XP. 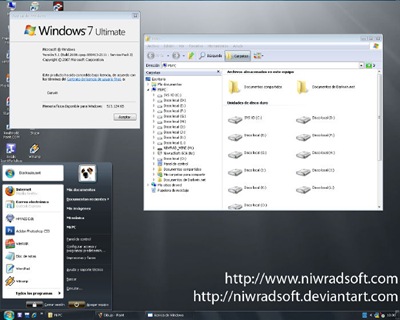 Seven Remix XP from niwradsoft is a free transformation pack for Windows XP, Windows 2003 Server and Windows Media Center Edition. Like any other transformation pack, Seven Remix XP replaces a great number of system files associated with the GUI of Windows. Files that contain icons, images, animations are extracts of Windows 7 to update your Windows XP interface to that of Windows 7. The installer also applies adjustments in the registry, it installs programs of third, skins and visual extras like sounds, styles, etc.

Seven Remix XP comes with a full uninstaller if you want to go back to the earlier look.