Anybody who uses the Internet regularly basically do the same things each day – login into email accounts to check messages, read feeds, check social networking sites for replies and so on. To aid us in these tasks we use bookmarks and stuff like speed dials, tools to auto fill forms, passwords managers to save our passwords and so on. Now add to this growing arsenal of automation tool an important one that was missing for all these years – a macro recorder.

A macro recorder, if you heard the term for the first time, is a software that records user actions and plays it back at a later time. The advantage of using a macro recorder is that it allows a user to perform repetitive tasks and often complex operations over and over again with minimum interaction. A user just needs to record the sequence of events and then automatically make it perform the same sequence whenever he desires without raising a finger. Cool, isn’t it?

DejaClick is that amazing extension that brings a macro recorder to Firefox. DejaClick installs a toolbar on the browser with buttons like record, play, open, save etc. To create a macro first you have to power on the toolbar which remains turned off by default. Open a new tab, click on the Record button, and proceed to open the site, login to your account or do whatever you wish to record. During the recording a status bar will pop up at the bottom displaying information about the progress of the recording. Once you are done, stop the recording and save the macro script on the hard disk.

Now whenever you wish to play the macro just load this script and hit the play button. Alternatively, you can save the script as a bookmark making it even easier to execute the macro. You can get a detailed result of the recorded script and after every time you execute it on a side panel. Later you can make minor modification to the macro like altering the speed of execution, set a timeout duration and even simulate the pauses between each event as recorded. 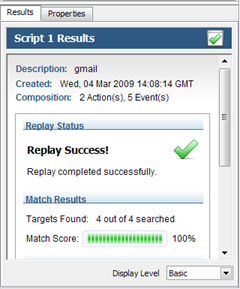 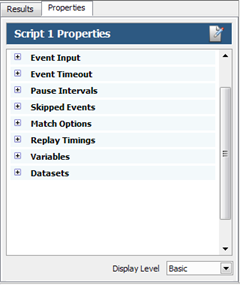