To be honest, I’m getting a little tired of screen capturing tools. Whenever I come across one I usually let it pass unless it has some thing extra to offer. Extensoft Screen Capturer is one such tool.

It is a simple, easy to use screenshot capturing program sporting a modern interface. Like any of it’s decent counterparts, Extensoft Screen Capturer supports capturing full screen, the active window or a selected region of the screen. You can also choose to capture the mouse in the screen grabs – this is the second program I have seen with this ability, after PicPick. The captured image can be copied to the clipboard, saved to hard disk, sent to the printer or even be emailed. Supported file formats are BMP, JPG, GIF, PNG and TIFF. 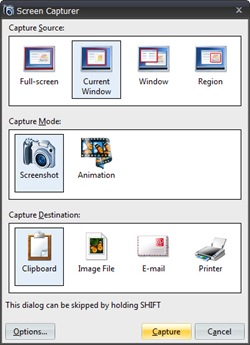 The additional feature that I was talking about earlier is the screen recorder. This program also functions as a screen casting tool enabling you to record your screen as a movie with or without audio. The frame rate can be adjusted before each recoding session and you are also allowed to use a video codec of your choice like DivX.

The only annoying part about this program is the mandatory registration requirement, even though it’s free.

[via Confessions of freeware junkie]