There has been a buzz of activity around the International Space Station for past several days and it culminated last Friday with the successful deployment of a new set of massive solar arrays. The new solar panels are so huge that the sunlight reflected from these arrays makes the ISS easier to spot with the naked eye than ever before. It is now the second brightest object in the night sky, even brighter than Venus and beaten only by the Moon!

Astronauts on board the ISS and space shuttle Discovery unfurled the arrays, successfully carrying out the main objective of the STS-119 mission. "Today was a great day," said ISS commander Mike Fincke to mission control Friday afternoon. "Today is the day the station went to full power." The length of the arrays unfurled Friday measures 73 meters (240 feet), tip to tip, with the S6 truss in between. The S6 solar array pair adds 892 square meters (9,600 square feet) to the station solar arrays, bringing the total surface area to nearly an acre. The station’s arrays now will generate as much as 120 kilowatts of usable electricity, enough to power about 42, 260 square meter (2800-square-foot) homes.

How to get a glimpse of the ISS as it flies over your head?

Now that the ISS is one of the most visible object in the night sky, it would be a shame if you say you never ever seen it. But unlike the Moon or the Venus that appears almost stationary in the sky, the ISS zooms across the sky taking just about 13 minutes to cross the visible portion of the sky on any place on earth. And unless you are standing on a flat desert with nothing in the horizon for miles you wouldn’t even have 13 minutes to view it. if you live in a city with lots of high rise structures and other obstructions your window of visibility is very small and short.

Besides, a satellite sighting is possible only if the following four conditions are met:

So in order to see the ISS you have to be out and looking at the precise moment. There are a couple of websites and software (Orbitron) that provide real time tracking of ISS and other satellites. NASA’s SkyWatch is a particularly helpful utility.

On SkyWatch’s online application click on the tab ‘Sat Info’ and select ISS as the satellite from the menu. Now go to the ‘Input’ tab and choose your city from the list. If your city or town does not appear on the list, enter the latitude and longitude of your place which is easily available with a Google search. After entering the data, click on Next Sighting. 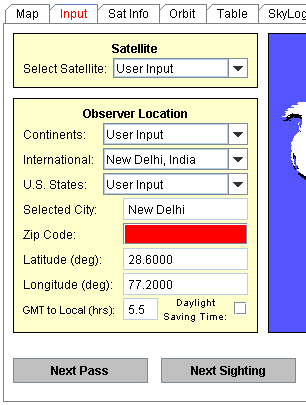 You will be presented with a table that provides you with essential data required to spot the station. 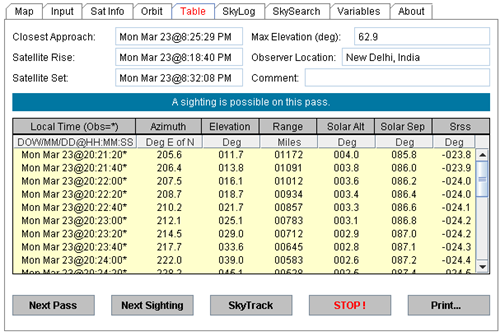 You can obtain data for several successive passes and sighting and print it.

Other useful online resources for tracking the ISS are ISS Tracker and ISS: Where is it now?