URL shortening services are supposed to shorten long winded web addresses into small, easy to share and remember URLs. But not DickensURL. DickensURL is not intended to shorten links, rather it has a weird purpose. It converts URLs into passages from the works of the 19th century novelist Charles Dickens. Just enter the URL, hit Convert, and get a link made out of an inspiring quote from Dickens.

How do people come up with such whacky ideas? It all started with a comment on Reddit. On a certain thread, some users were discussing how computers baffle grownups such as their parents. 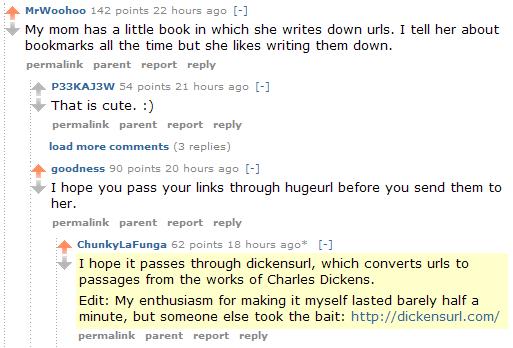 highwind says that the his service is currently using only about 50 quotes from Charles Dickens’s novels. You can catch the discussion here, leave comments or submit bug reports.

Here is one sample: http://dickensurl.com/2462/Money_and_goods_are_certainly_the_best_of_references.