How much can you save in 4 KB? An image? No. A word document? No. A high definition 3 minute long animated 3D scene? Yes! This is the magic of procedural graphics.

A typical 3D scene we see in games and animations consist of dozens of textures, meshes and models. These components are created in advance and saved as files, which are loaded by the computer and assembled to create a scene on the monitor. This is how conventional graphics work. Procedural graphics, in contrast, do not employ previously created and saved textures but generates them in real time as you run those animations. The result is that the file size is reduced drastically since you don’t have to store textures and other information. 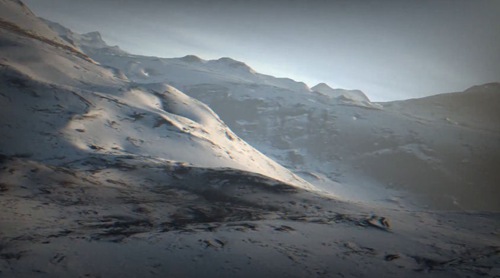 A still from a procedurally generated demoscene

Although procedural graphics isn’t a new technology it has been used sparingly in video games. It was only during the early part of this decade that procedural graphics saw a new beginning through the famous work of a German group called “Farbrausch”. The team has a special talent in creating procedurally generated 3D demoscenes composed of intricate models, structures and textures and at the same time keeping the file size under 64 KB or less. Later they even released a 3D shooter game .kkrieger created entirely using procedural graphics and only 96 KB in size.

This is a standard definition YouTube video. Make sure you watch it in HD

Recently I read about another team of developers who has been constantly pushing the limits of 3D graphics with their work on procedural graphics. Their latest release is “elevated”, a demoscene which takes you on a flyby over a landscape of realistically rendered mountains and lakes. It was achieved in 4KB, breaking all previous records.

Elevated is available for download. You will require a powerful graphics card and lots of free RAM in order to run it in it’s full glory. If your PCs aren’t powerful enough, you can watch the high definition videos. I, for one, had to be content with the videos.