TestDisk is not the usual kind of data recovery software you come across everyday. It’s lack of a graphical interface and pretty previews of ‘found’ files might shun users away, but those who know better will find that TestDisk is a seriously powerful data recovery tool that is capable of recovering lost data from any partition under any operating system.

TestDisk can help recover lost partitions and make non-booting disks bootable again when these symptoms are caused by faulty software, certain types of viruses or human error such as accidentally deleting a Partition Table. It’s most powerful feature is it’s cross platform support. TestDisk can run under:

What TestDisk can do?

TestDisk can find lost partitions for all of these file systems

Did it miss anything? I guess not. And if it did, just ask them to include support or help yourself because it’s open source. 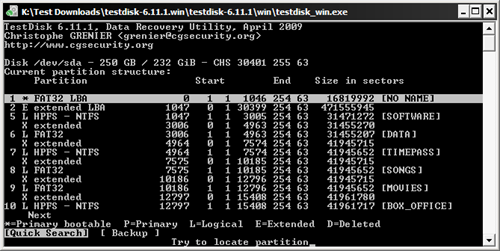 As I mentioned, TestDisk doesn’t have a GUI, it’s all command line based. But you don’t have to type commands. Simply select the various options using the arrow keys and press Enter to execute them. So yes, it does have an interface, it’s just not graphical.

Unlike most other data recovery tools, you can’t preview the files recovered or selectively recover files. It will extract all files recovered and save it in a directory. TestDisk comes bundled with another tool called Photorec which is essentially the same tool but designed to recover only images. So if you want to recover only image files, you will use Photorec and not TestDisk and save time.