In a market which is ruled by only a handful of players, very few people pay attention to alternative browsers. And why not? After all what does these new browsers have to offer which is not already available from browsers such as Firefox, Internet Explorer, Opera or Chrome? Well, QtWeb does have a few features to boast about.

QtWeb is a light weight, open source webkit based browser that comes on a mere 5MB installer. There is also a portable version consisting of a single executable file. QtWeb has almost everything you would expect from a modern browser: 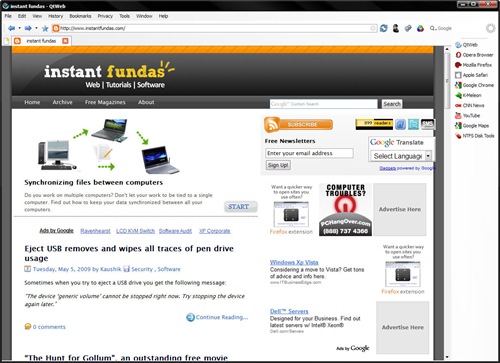 A useful addition to QtWeb is a virtual keyboard, that allows you to enter passwords and login information without worrying about keyloggers. Another innovative feature is that the toolbars can be moved about freely and even out of the browser to their own separate window.

The rendering is pretty good and fast and according to their comparison table it scores 100 of 100 on Acid3 test.

QtWeb is impressive, but not impressive enough to make people switch to it, at least in near future. But it does have an exciting feature that makes it attractive for web developers and webmasters – the Web Inspector. The Web Inspector allows you to view and inspect HTML elements, debug JavaScripts, view loading time and profile resources. 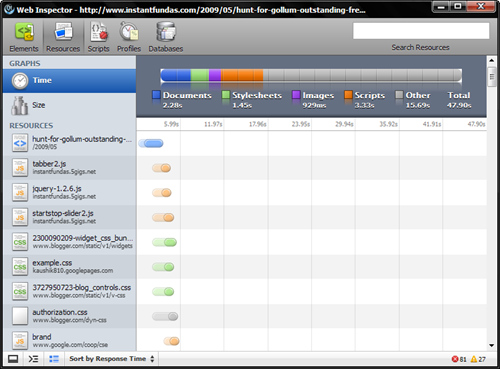 The Elements tab gives you a brief overview of the HTML and stylesheet of the page and also the number of W3C Validation errors if any and other warnings.

The Resource tab is the most useful. It breaks down all the components of the page – images, stylesheets, scripts etc and displays the time taken by each to load. This is very useful in analyzing the loading times of the page and determining which components are taking the most time and slowing down the page. You can also see Client Request and Server Response HTTP headers for various elements.

Current drawbacks of QtWeb is the absence of an RSS reader, no support for Java and is only available for Windows. The RSS reader shouldn’t be a problem if you are not seriously considering to use QtWeb as your primary browser. But Java support and cross-platform installer would have been useful.