Ships is a free browser based simulation game released by PlanetInAction.com that became the first game ever to use Google Earth as a game engine. The game lets you be the helmsman of your own fleet of ships comprising of barges, cargo ships, container ships, and even a cruise ship. You can drive the ships anywhere in the world and behold the incredible scenery at a leisurely pace. All you need is the Google Earth plugin.

Apart from the default navigation system of Google Earth, the game features 3 additional camera modes similar to what can be seen in many games. There is a "head view" which locks the viewer to the ship. The fixed view simulates a fixed camera that tracks the ship as it sails by. Once the ship has passed it will
randomly relocate itself somewhere in front of the ship. 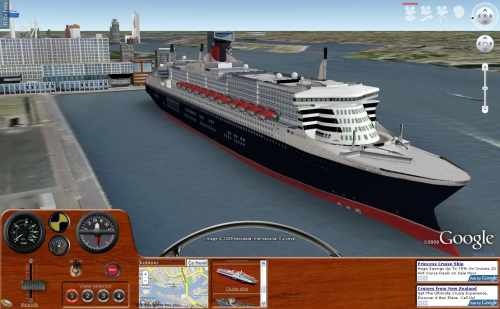 "Ships" is a case study / Technology show piece that demonstrates what can be achieved with Google Earth. While map data has a tremendous value for practical purposes, it can also be used as a backdrop for a range of games…

Google Earth proves extremely capable to handle many overlays with alpha transparencies which enables developers to create intricate and graphically rich instruments. Proof of that can be seen in the Compass/rudder instrument which consists of 5 layers of bitmaps. (compass rose, rudder dial, rudder position needle, rudder target needle and instrument bevel).  Each layered image uses alpha transparency to create a sense of depth and shadows. There really is no limit what can be achieved in the hands of an experienced graphics artist.

The game’s 3D models have all been created in Google Sketchup and some texturing were done in a range of other programs. The game’s creator Paul van Dinther also used Flash 8.0 and Javascript and Soundmanager 2 for creating sound effects.