Applications such as server systems, image and data processing and games require fast hardware to perform at an acceptable level and speed. In such cases the hardware that holds them back is usually the hard disk. Hard disks are inherently slow because they are based on mechanical systems consisting of moving parts. Even the fastest hard disk is several times slower than the slowest RAM.

One solution to this problem is to use Ramdisk. A Ramdisk or RAM-Disk is a software layer that transforms a segment of the random access memory (RAM) into a virtual secondary storage or hard disks. By moving the data which is currently being processed to these Ramdisk, we can greatly increase the access time and the throughput of the computer. Besides the service life of a physical hard disk can be prolonged by reducing access to it.

VSuite Ramdisk (Public edition) is one such free RAM disk software for Windows. This software can create up to several RAM disks in the computer’s main memory which are identical to physical hard disks and can be recognized by Windows or any other disk management software as physical hard disk. Needless to say, the computer must have sufficient amount of memory to allocate a part of it to a RAM disk. 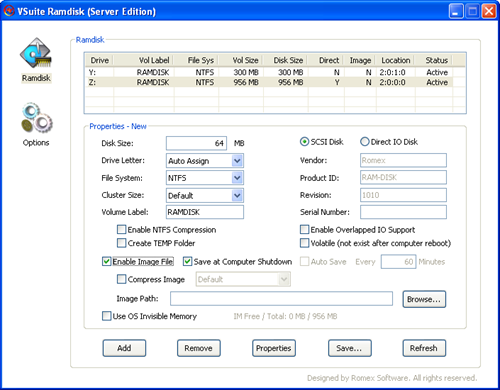 VSuite Ramdisk can automatically load a hard disk image file into the RAM disk at system boot up and then automatically save the data in the RAM disk to the image file at shutdown. This allows you to use the virtual hard disk transparently as if it physically exist. The software can also save the data periodically at certain intervals so that an unexpected system crash doesn’t make you lose data. On a personal computer, a clever use of the RAM disk will be to move the browser cache, Windows swap file and temporary files to it.

There is another benefit of using VSuite Ramdisk: VSuite Ramdisk is capable of addressing memory in excess of 4GB. So even if 32 bit Windows can detect only 3GB memory, enabling the “OS Invisible Physical Memory” option in the software allows Windows to detect and use memory up to the full 4GB.

Some important features of VSuite Ramdisk