There is no denying the fact that performing the same physical task repetitively over a long time span causes pain and discomfort. There is a term for such a disorder – Repetitive Strain Injury (RSI). RSI stems from prolonged repetitive, forceful, or awkward movements of limbs, usually the arm. The result is damage to muscles, tendons, and nerves of the neck, shoulder, forearm, and hand, which can cause pain, weakness, numbness, or impairment of motor control.

One of the risks that people who work at the computer face is RSI.

Fine hand movements, repeated hour after hour, day after day, thousands upon thousands of times, eventually strain the muscles and tendons of the forearms, wrists, and fingers, causing microscopic tears. Injured muscles tend to contract, decreasing the range of motion necessary for stress free work. The sheaths that cover delicate tendons run out of lubrication because they aren’t given time to rest, so tendon and sheath chafe, resulting in pain. Due to this abrasion, tendons become inflamed, and begin to pinch neighboring nerves. This can result in numbness, tingling, or hypersensitivity to touch. Unless this cycle is interrupted, it repeats itself over and over, and a long-term, chronic problem results.

Repetitive strain injury can affect more than just your hands and wrists. Poor posture can lead to severe neck and back injuries. Staring at a computer screen can lead to eye strain. Repetitive reaching for a mouse can lead to arm and neck strain as well as spinal asymmetry.

You don’t have to panic. It’s not that every computer user will eventually suffer from RSI, but you have to take steps to prevent it. You can take help from software that reminds you to take breaks, some simple timers that blank your screen during schedule breaks (see Eyes Relax, Anti-Strain Alarm Clock).

Workrave is another software that times your computer usage and prompts you at set intervals to take breaks. Workrave is a lot different from other reminder tools that I have come across. 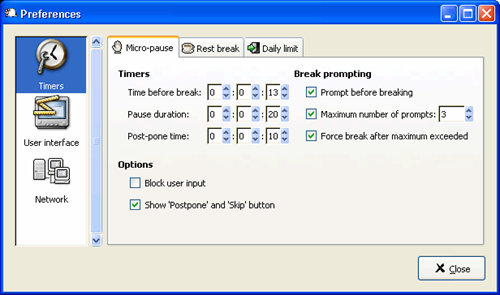 Workrave has 3 types of break. The first is micro-pause, a short thirty second break which occur every three minutes, by default. The idea is to make you stop using the keyboard and relax your hands as frequently as possible. You don’t have to walk away from the computer since the breaks are short – just 30 seconds. One nice feature of the micro-pause is that the timer pauses if you stop using the keyboard and mouse for a few seconds. So if you stop typing to think or say attend a call, the timer pauses since you’re already taking a break.

Next comes the rest break which are longer and comes at an interval of 45 minutes by default. During these breaks you are supposed to walk away from the computer, stretch your arms or take a cup of coffee. You are also given a few exercises to perform. Like micro-pauses, the timer for rest breaks is paused during period of inactivity. 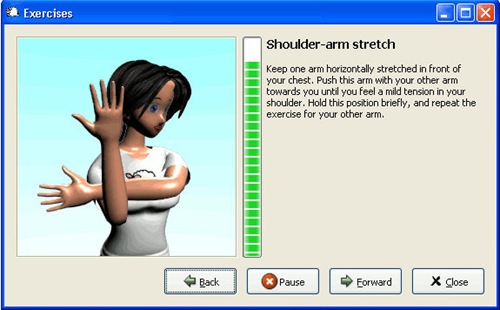 The third type of break isn’t a break, it’s a complete shutdown. It monitors the total amount of time you spend on the computer in one day and once the set number of hours is over it will prompt you to stop using the computer. The default is set to 4 hours, which will be rather low for most users. Of course you can increase the allotted time for each day or completely ignore it, but that would defeat the very purpose of the software. Here again, the timer pauses when you are inactive.

The software is a bit aggressive during the rest periods – it blocks all inputs by default. You can change this to a simple reminder or blank screen if you wish. At first you might find the frequent reminders a bit annoying or be tempted to disable it altogether. I say, let it do it’s job and you will never overstress yourself.