The title of this post does not do justice to this application. Zen Key is so much more than an application manager, that it’s difficult to describe it in a single sentence.

Zen Key has an embarrassing number of functions and utilities built into this little application. Firstly, it allows me to access all important folders on my system with minimum fuss. If I click on the applications icon on the taskbar or the floating icon, I can can get to every Windows system folder possible such as Fonts, Application Data, Admin Tools, Program files, Startup, History, Task Scheduler etc. I can also access all Control Panel programs. I can open Windows applications like Calculator, Media Player, Character map, Registry editor, System restore, Device manager, Remote Desktop … the list goes on and on. That is one aspect of Zen Key. 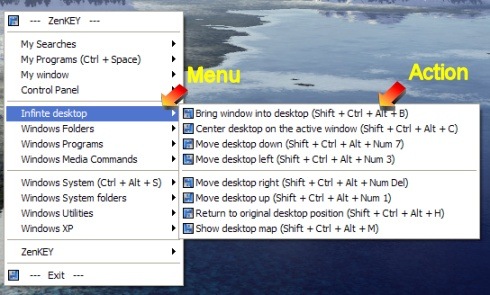 The other function is window management. I can set transparencies, tile windows, maximize or minimize all of them, move windows to the right-left-top-bottom.

Among other things, Zen Key can also do the following:

Zen Key has too many functions to get you overwhelmed for a while. It will take time to get used to it but it’s worth it.