Sometimes one desktop isn’t enough. We then use virtual desktop programs. At it’s core, DoubleDesktop too is a virtual desktop manager, but it employs a different approach.

Unlike traditional virtual desktop managers, DoubleDesktop doesn’t create separate multiple virtual desktops, it just doubles the width of the desktop. The program installs a small arrow icon on Windows Tray. Clicking on that icon you can switch between "left" and "right" parts of the desktop. From the users point of view it looks and works the same like any virtual desktop manager. But you will notice the difference when you drag a window beyond the right or left edge of the screen and then switch the desktop. You will find that the other half of window appears on the second desktop. It’s like having a really wide desktop that has to be switched from one part to the other. 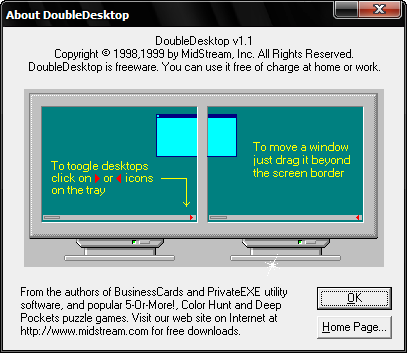 The start menu button, the system tray and desktop icons however do not change position.

The disadvantage is you get only two virtual desktops while most other programs give you at least 4. But DoubleDesktop is extremely light on resources.