Several months ago I wrote about an excellent multimedia converter called SUPER, and then I went ahead and wrote that “it’s the only multimedia converter you will ever need”. One year after, I still say SUPER is one of the best all-in-one multimedia converter I have used. The software is free and works quite well, but is not open source, which some of us have more faith in. In that case you can take a look at MediaCoder.

MediaCoder is a free audio and video transcoder or converter, that puts together various open source audio and video codecs and tools into one friendly GUI. Most of the tools used in MediaCoder, are powerful but command line based. MediaCoder maps hundreds of parameters of dozens of these command line options into an easy to use graphical interface. It supports batch encoding and it’s functionality can be extended with plugins. 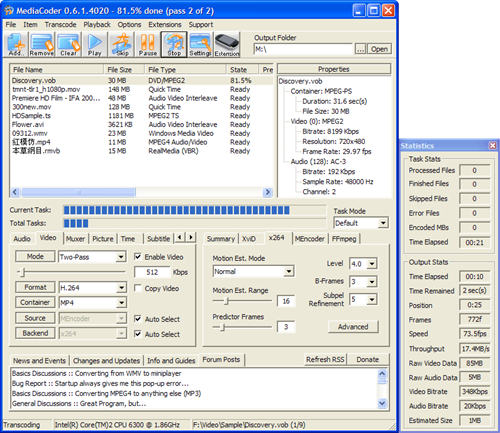 This software is capable of piping the decoder’s output directly into the encoder’s input, rather than using temporary files. This allows it to convert large amounts of data without using excessive disk space.

MediaCoder also has a built-in media streaming server which can be used to stream out audio and video files through HTTP protocol, using it’s on-the-fly transcoding capabilities.

MediaCoder can be used for

It supports a wide range of formats:

Media coder is fully standalone, meaning that all codecs are inbuilt. The software won’t install any codec into your system minimizing the chances of breaking existing codecs or having conflicts with them. This software should answer all of your transcoding needs.