There are plenty of eye candy programs for Windows from themes to icons, start menu to toolbars, but Nimi Visuals is one of a kind program. This program doesn’t add just one of two effects to Windows but about a hundred – from transparency to animation, glows and reflection and more. Recently, Nimi Visuals added about two dozens more features in it’s latest release. 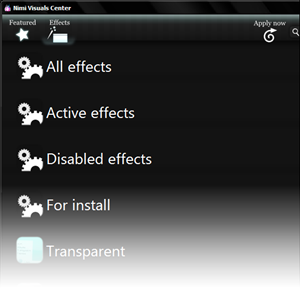 Here is a brief  list of effects built in this tool

Despite it’s embarrassing number of functions, Nimi Visuals is surprisingly small at just under 1 MB. Although while running it consumes a fair share of memory which is understandable. The program doesn’t require any special hardware as all graphic effects are software based