Tribler is a new, open source BitTorrent client developed by researchers from several European universities and Harvard that provides completely decentralized search capabilities, making it the first true Peer-2-Peer BitTorrent client ever. Tribler makes torrent tracker sites like PirateBay, Mininova and others redundant because the .torrent files can now be hosted among other peers.

In torrent networks, file transfer has always been decentralized but they still require central servers like PirateBay to host the tracker, the .torrent file. But with Tribler this is not required. Using a new P2P protocol called BuddyCast, Tribler enables user to share torrent files directly among peers without the need of a tracker, just like traditional P2P software like Limewire and Ares work. 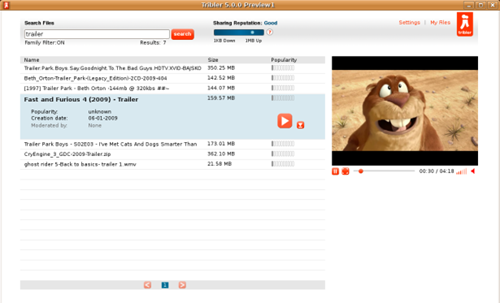 The application looks slick and comes with a video player, that you can use to play torrent video files which is awesome. You can also use it to search content from video sites like YouTube and LiveLeak. However, the client itself is rather bare bone. Unlike BitTorrent clients like uTorrent, Tribler offers almost no information about the files being downloaded, their content, their sources etc. It was a big turn down.

Another downside of this application is that the content is limited, as the files come only from the Tribler users.

The technology is interesting and something we might eventually need in future with major torrent sites being dragged to the court. Unfortunately it isn’t going to work, not unless they improve the client.