Gone are the days when you would go out on roof tops at night with a star map tucked under your arm and a flash light to watch the skies. Now you take your laptop with you. You don’t even use star maps, there are much better star gazing software out there. I discussed quite a handful of these earlier.

Aciqra is another open source virtual planetarium and sky map program, that tracks nearly 120,000 stars, the 8 planets, all 109 Messier object, the sun and the moon from any location on Earth to an accuracy of 1 degree for the next 50 years. Using it as pretty straight forward – just put in the latitude and longitude of your location to get the exact position of the heavenly bodies as it would appear of the sky at your place. The program doesn’t focus on realism the way “Stellarium” or “Celestia” does, just a simple representation of the stars similar to a sky map. 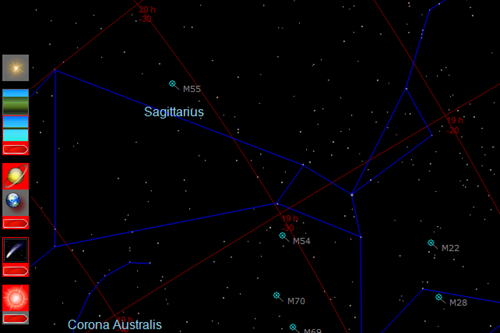 It also includes a wealth of built-in tools called "widgets" which include a solar system viewer, an eclipse/transit predictor which lets you know beforehand when the next eclipse will occur, and a conjunction engine.

Aciqra is light, portable and Windows only.