The Apollo missions represent the pinnacle of human achievement, the acme of human exploration. And the computer that took humans to the moon was a marvel in itself. Developed by the MIT Instrumentation Laboratory, it was quite an amazing piece of hardware in the 1960s. It was the first computer to use integrated circuits (ICs), running at 1 MHz it offered four 16-bit registers, 4K words of RAM and 32K words of ROM. Heck, your cell phone has more processing power than that!

Would like to own your very own Apollo Landing computer? Well, that’s possible, because a geek named John Pultorak created a working reproduction of the Apollo Guidance Computer (AGC) and wrote a complete manual that will allow you to build your own Apollo flight computer clone. You can find this fantastic 1,000 page documentation which includes detailed descriptions and all schematics of the computer, posted at Galaxiki. 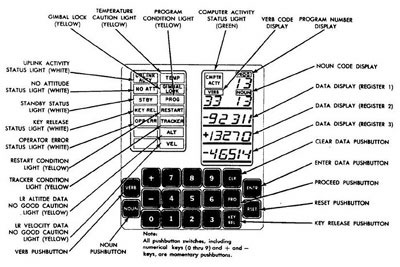 John Pultorak, a 54 year old Lockheed Martin software engineer, built his own Apollo AGC in his basement. It took him 4 years to build it (working about 10 hours a week on the project) and cost him $3, 000 for the required hardware. The manual he prepared also includes the required software code for the computer.

The original Apollo AGC cost NASA $150,000. It didn’t have a hard disk, just 32K words of hard wired ROM. The AGC multitasking operating system was called the EXEC, it was capable of executing up to 8 jobs at a time. The user interface unit was called the DSKY (display/keyboard, pronounced "disky"); an array of numerals and a calculator-style keyboard used by the astronauts to communicate with the computer.

The hardware looks primitive by today’s standard, but it accomplished a feat that hasn’t been repeated since. The AGC controlled a 13,000 kg spaceship, orbiting at 3,500 kilometers per hour around the moon, landed it safely within meters of a specified location and guided it back from the surface to rendezvous with a command ship in lunar orbit. The system also kept fuel consumption to a minimum because the spacecraft only contained enough fuel for one landing attempt.

Leaves you breathless, doesn’t it?