I have been a long time uTorrent user. It’s light, it’s easy and has everything I need in a Torrent client. Now a new, rich, open source, and cross platform BitTorrent client has come to my notice. It’s almost a clone of uTorrent, and in some cases, even better than uTorrent.

Deluge is created using Python and GTK+, bringing a native, full-featured client to GTK desktop environments such as GNOME, KDE and Xfce. It also runs under Windows using the GTK runtime environment. It’s easy to tell that Deluge has been inspired by uTorrent, which is a good thing. If you are familiar with uTorrent, you will have no problem using Deluge, it has the same layout as the former. 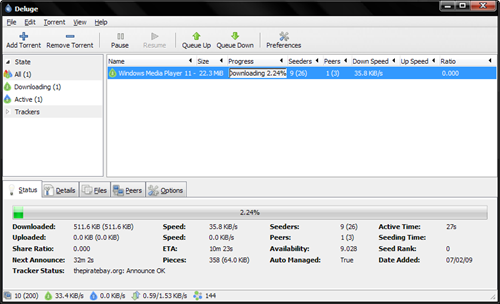 Deluge’s supports plugins, plugins being almost like de facto standard for open source products. In fact, most of Deluge’s functionality comes from plugins although you won’t notice is as these are installed by default. A few more are available for download, like Torrent search, RSS feeds, Network Activity Graph etc. 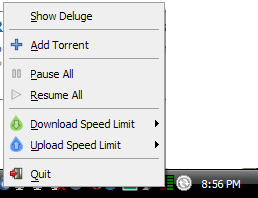 One option that I like in Deluge, is the ability to minimize the program to the system tray, and password protect the tray icon. There are times when you keep your PC running for torrenting while you are away. You can then put a password in Deluge to prevent anybody from stopping the download or snooping around.

Deluge has an option to prioritize the first and last pieces of a file, allowing you to preview media files before downloading. I wish uTorrent had such an option.

Other useful features include:

– Ability to select files from a torrent before beginning the download
– Ability to specify global download directory, and a completed download directory
– Ability to stop uploading a torrent once it has reached a specified ratio
– Global and per-torrent speed limits
– Queuing system to better manage bandwidth between downloads
– Supports BitTorrent Protocol Encryption, Private Torrents, uTorrent Peer exchange and many more.