Eye of the Kraken is a point and click detective adventure game full of rib-tickling original jokes and absurd comedy. The game was originally released commercially in 2002. Then sometime in 2005, the game publishers Absurdus made the game available as freeware, which is how I came to know about it.

The game opens with a short grainy black and white animation sequence. A thief has stolen a mysterious object known as the ‘Eye of the Kraken’ and hops on board the sailing ship, Glutomax, which has just left the docks. Luckily Abdullah, an emissary to the Sultan of the Ottoman Empire, is also on board the Glutomax and it’s his responsibility to track the culprit down before the ship reaches Hyade Island in five days’ time. 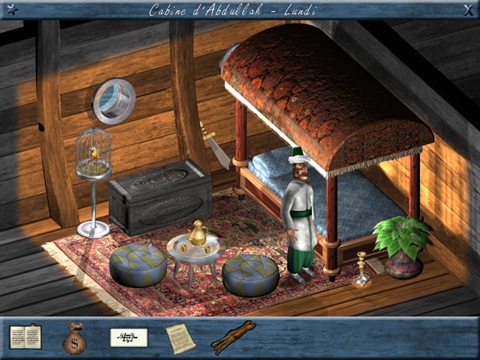 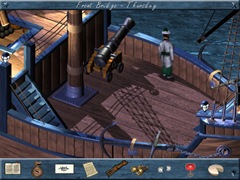 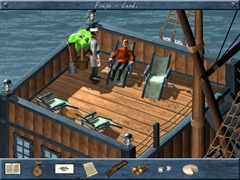 Abdullah has to investigate and interrogate his fellow passengers, and this ship has some of the most unusual passengers on board. Famous literary characters like Odysseus, Count Dracula and Ophelia, the heroine of Shakespeare’s tragedy Hamlet, historical figures like the 15th century poet Francois Villon, the Russian “Mad Monk”, Rasputin and Olaf, the Viking.

The game’s selling point is it’s humor. I laughed at their jokes, dialogues and their often absurd and bizarre tasks (finding sausages to run an ice machine, for instance and floating humans inside a periscope!). Much of the game’s humor arises from the dialogues. Rasputin has a particularly great story how he escaped death. You can go up to any character at any time, click “Blabla” and start a nonsensical conversation.

The game has no voice acting, which actually suits the game and the graphics are quite colorful. The puzzles are wacky and not too difficult to solve.

Eye of the Kraken is a thoroughly enjoyable adventure game. If you love such point and click games and looking to spend some 6-7 hours of pure fun, this is the game you should try.