Pluto Strikes Back, is a great little game to waste away your weekend (and thereafter). The game’s storyline is this: Pluto is angry at being demoted from a full planet status to a humiliating “dwarf planet”. To seek revenge he powers up his "meteor magnet" or in other words, his gravitational pull, and equipped with a large baseball bat knocks all incoming meteors and space debris at the rest of the planets of the solar system. 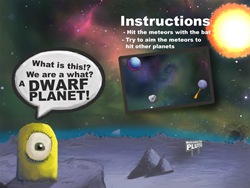 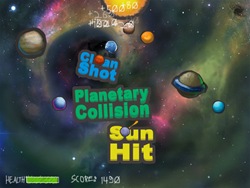 You control the swings of the bat by moving the mouse pointer around, aiming to maximize the score by making powerful and direct hits. The meteors at first appears to drift slowly into view then suddenly gains speed as it’s captured by the new intense gravitational field of the angry planet. It takes a few minutes to adjust to the sudden burst in velocity as the rocks approach the planet. You get extra points for ricochets and other trick shots. But missing a swing inflicts massive damage on Pluto, which takes a heavy toll on it’s health and eventually ending the game.

The game is less than 5 MB is size and was created in under seven days. And did I say how funny the music is?