No matter what the general population think about Microsoft, it’s founder Bill Gates is an awesome person. Recently Bill Gates bought the rights to seven lectures by the great physicist late Richard Feynman, which were filmed by the BBC in 1964, a year before Feynman received the Nobel Prize in Physics. He then put up the videos on Microsoft’s website so that everybody can watch it for free.

Who is Richard Feynman? 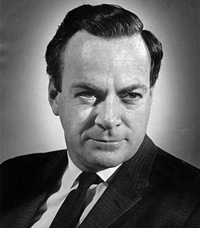 Pity you asked. Richard Feynman is one of the most brilliant physicist the world has ever seen. He was more than a physicist – he was an amateur painter, a skilled safecracker, bongo player, juggler and a great prankster and story teller. Most people have diverse interest and they often try to pursue them with varying degree of success. Feynman was different, he excelled in all. Richard Feynman also had interest in Biology, a subject at the other end of the spectrum, and was involved in various important research work on the subject.

There are two kinds of geniuses: the ‘ordinary’ and the ‘magicians’. An ordinary genius is a fellow whom you and I would be just as good as, if we were only many times better. There is no mystery as to how his mind works. Once we understand what they’ve done, we feel certain that we, too, could have done it. It is different with the magicians. Even after we understand what they have done it is completely dark. Richard Feynman is a magician of the highest caliber.

Bill Gates had stumbled upon the lectures that Dr. Feynman gave at Cornell University called “The Character of Physical Law,” a number of years ago, watched them with a friend using a traditional film projector, and “fell in love” with them. Bill Gates told his associates that if had watched the lectures earlier in his life he might have become a physicist instead of a software entrepreneur. Thank god Bill, you didn’t!

"No one was more adept at making science fun and interesting than Richard Feynman," Gates said in a statement announcing that the lectures are now available for free. "More than 20 years after first seeing them, these are still some of the best science lectures I’ve heard. Feynman worked hard during his life to popularize science, so I’m sure he’d be thrilled that now anyone, anywhere in the world, can just click a button and experience his lectures." 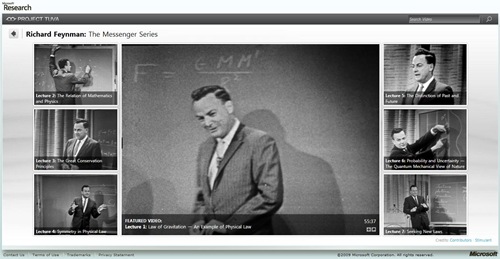 The video lectures were put up on Microsoft’s Research website under a new section named Project Tuva. The name “Tuva” was chosen in reference to Dr. Feynman’s decade long (and ultimately unsuccessful) effort to reach the tiny Russian republic of Tuva, which is located in Asia, toward the end of his life.

The Tuva Web site will be expanded with additional Feynman lectures in the future. When it is completed it will offer searchable transcripts from the lectures as well as commentary from well-known physicists. The site also offers viewers the ability to annotate and take notes. Currently, the first lecture has an “extras” features on the right side of the Web page which includes interactive animations and other components. Note that you will require the Silverlight browser plug-in to watch the videos.

This isn’t the first time Bill Gates has made such an acquisition. In 1994 he acquired the Codex Leicester, a collection of the written work of Leonardo da Vinci, for $30.8 million in an auction. He however did not disclose the amount he spent to access the rights to Feynman lectures.

[via The New York Times and The Register]