Nirsoft, the software publisher that creates useful tiny utilities, has a new software on self – BlueScreenView. This is a software that helps you analyze the cryptic messages and error codes the infamous Windows Blue Screen of Death throws at your face. Though BSODs are few and far between ever since Windows XP Service Pack 2 came out, they still show up sometimes usually because of conflicting hardware, corrupt drivers or poorly written software.

Among the first things I do after installing Windows is to disable “Automatically restart after BSOD”, so that I can see the error message and what files or hardware caused the crash. You can do this by following the steps under “Cause” on this page. Now with BlueScreenView it’s even easier to examine and troubleshoot the error.

BlueScreenView scans all your minidump files created during BSOD crashes, and displays the information about all crashes in one table. For each crash, BlueScreenView displays the minidump filename, the date and time of the crash, the basic crash information displayed in the blue screen and the details of the driver or module that possibly caused the crash (filename, product name, file description, and file version). It even recreates the blue screen for you to examine. Sweet. 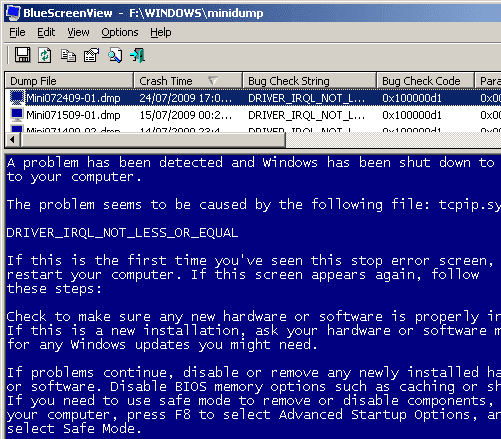 For each crash displayed in the upper pane, you can view the details of the device drivers loaded during the crash in the lower pane. BlueScreenView also mark the drivers that their addresses found in the crash stack, so you can easily locate the suspected drivers that possibly caused the crash.

BlueScreenView doesn’t require any installation. Just run the EXE file to launch the program. BlueScreenView works with Windows XP, Windows Server 2003, Windows Server 2008, Windows Vista, and Windows 7, as long as Windows is configured to save minidump files during BSOD crashes. Currently, the software can only read minidump files of 32-bit systems; 64-bit minidumps are not supported.