Those who ran away from Microsoft Office 2007 to OpenOffice.Org to escape the Ribbon interface, prepare yourself for some terrifying news: the ribbon is stalking you! OpenOffice.Org is working on a new interface and some demo screenshots they launched last week shows a sparkling new Ribbon! 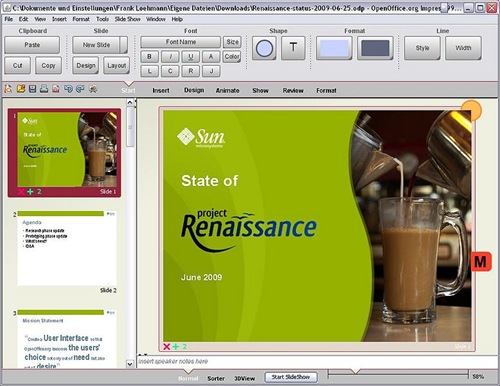 Two months ago, OpenOffice.Org started a prototyping phase called project Renaissance to create a new user interface for OpenOffice.org. This has ended last week, and the project presented a new design. The Office 2007 inspired ribbon can hardly be unnoticed, and it looks gross. Sun says that it’s just a prototype and the user interface hasn’t been yet polished. But I doubt the final product will look any better. OO.o’s interface and icons has always been depressing.

The feedback from commenter’s consist mostly of disgust. But resistance is futile. This was going to happen sooner or later. OpenOffice.Org’s interface has always been made to mimic that of MS Office, to enable users to migrate easily to the free alternative and keep the learning curve as shallow as possible. And if you look at it without any bias, the ribbon isn’t a bad design actually. The only problem is they eat a lot of vertical space.

If you want to try out the new layout there is an online demo of Impress (requires Java 6).