Some applications, particularly browsers, suffer from a problem called memory leaks. Applications with memory leaks refuses to give up memory previously used but no longer needed. For instance, if you open a page in your browser, the memory space occupied by the browser increases to accommodate the new page. Once the page is closed, the browser should return the additional memory acquired back to the system. But it doesn’t, and when that happens the application is said to suffer from memory leak. Some of the biggest offenders of memory leaks are Firefox and Opera 9.5.

While problems like memory leaks are internal to the application and can only be completely solved by the developers or by applying tweaks, if available, we can keep a check on it by periodically optimizing the memory usage of these programs.

Minimem is one such application. Minimem was initially developed for Firefox, but now can reduce the memory footprint of any application by freeing unused memory. It runs in the background and can be set up to optimize as many processes as the user wants. Unlike other memory optimization tools, it gives the user full control over what applications they want to optimize, when and how often, as well as the possibility of optimizing memory only when required and relevant. 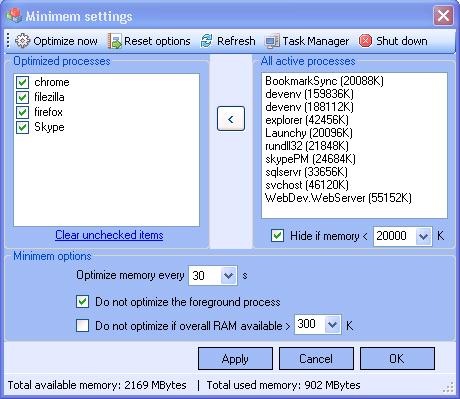 Minimem optimizes memory by removing as many non-necessary memory pages as possible from the selected processes at regular intervals, the period of which can be defined by the user.

Minimem can’t make large optimizations but it surely returns a couple of megabytes back to the system every time it runs. That of course, depends on the type of application you are running. If you run a lot of memory intensive applications and want to squeeze every bit of unused memory out of the running processes, even a few MBs are helpful.