Perfgraph is a hardware and bandwidth monitoring tool for Windows. Unlike other monitoring application, Perfgraph can embed graphs displaying the status of various hardware components right on the Windows taskbar. Here is one example of a graph displaying CPU utilization.

Perfgraph is an extension to the taskbar and runs within the explorer.exe process. It can be activated by right-clicking on the taskbar and choosing Perfgraph from the Toolbar menu. This will cause a graph to appear on the taskbar displaying the particular hardware activity it is configured to monitor. It’s possible to display several different graphs to monitor several different areas simultaneously on the taskbar. Of course, that would mean less space for other tabs. If you have a large monitor and a larger taskbar, the program can be made to display texts along with the graphs.

Don’t like the clutter on the taskbar? Not to worry, because Perfgraph can be moved from the taskbar to the desktop by simply grabbing it and dragging it away. When you release the graph in the middle of the screen it will turn into a floating toolbar. If you drag it to any edge of the screen, it will dock itself. The graph can be resized too. 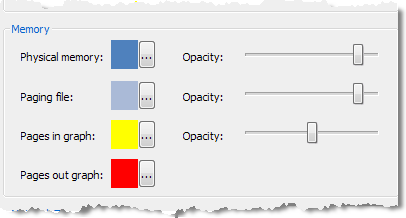 Because Perfgraph’s colors are all customizable, it can be blended very well with the taskbar or the desktop.