What is Protein Folding?

Proteins are the workhorses in every cell of every living thing. Proteins keep our bodies functioning and healthy, and they are also involved in many diseases and it’s cure. Proteins come in thousands of different varieties, but mostly they come in long chains of amino acids. But they don’t stay in a straight line; proteins often fold to make a compact blob. The structure of the folded protein specifies the function of the protein.

Scientist still don’t know a lot about why proteins fold or display some strange folding behavior. The more scientists know about how certain proteins fold, the better new proteins can be designed to combat the disease-related proteins and come up with cures for life threatening diseases like HIV/AIDS, Cancer and Alzheimer’s. Of course, that’s easier said than done. Part of the problem lies on the astronomical number of ways even a small protein can fold because of the availability of large degrees of freedom. Figuring out the various possible structures of a protein is one of the most challenging problems in biology today.

Because of the large amount of money, time and processing power required to research on the subject, researchers have hit upon a novel idea of harnessing the power of the human brain to solve the complex computational problems. They have devised a game called Foldit where players solved puzzles involving protein folding problems.

Computers programs too can calculate all possible protein shapes and make computations, but researches believe that human players can figure out things faster. In fact, personal computers worldwide are already involved in computing protein folding problems in one of biggest distributed computing projects –[email protected] where millions of wasted CPU cycles on thousands of personal computers are utilized to perform calculations. [email protected]me is just one such project. If you are interested, there other distributed computing projects you can get involved in. 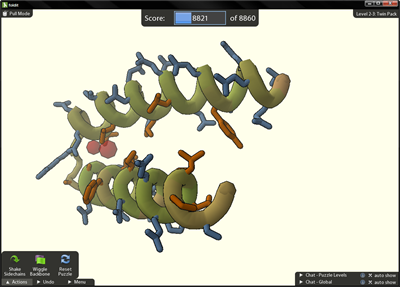 Foldit is available for the Windows, Linux and Mac platform. Players need to install the game, and register an account to get new puzzles to solve and also to submit scores. In the beginning a series of practice puzzles teaches the rules of the game and the basic laws of protein folding. The basic goal of every puzzle is the same – to achieve the best structure. There are no right answers because the game developers doesn’t know it either.

Points are awarded not by how close you’re getting to the known solution, but by how much energy would be needed to hold a real-life protein in the shape you’ve created. The game also allows players to compete against other players to collect the highest point for a specific protein. Puzzles expire when the best solution has been found and a new protein and a new puzzle becomes available.

The game is actually quite challenging, and the structures so delicate it can get frustrating at times. You will need the patience to keep trying. Overall it’s a nice way to waste some time and that too for a good cause.