T-Messenger is an Adobe AIR based Twitter client for Windows, Linux and Mac operating systems with instant messaging capabilities. Like many similar desktop Twitter clients, T-Messenger boasts of number of advanced features and usability enhancements not found in the web version of Twitter. 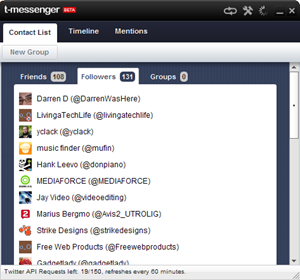 T-Messenger supports drag and drop for uploading pictures. Just drag any picture from your computer, drop it in T-Messenger’s textbox to share.

T-Messenger will also automatically shrink URLs as you type, and if you exceed the 140-character limit it will make multiple tweets allowing you to post whatever you want without having to worry about making your message smaller.

And possibly the best feature of T-Messenger is that it can be used as an IM client. Just double click on a contact, send the message and see their responses on the same conversation window in real time, just like any other IM client. I think using Twitter as an instant messenger is a wonderful idea, not that it’s new one – people use Twitter to chat all the time. T-Messenger just makes this better and easier to use.