Vectir is a remote control software for Windows that allows you to control  applications on your PC such as media players (Winamp, iTunes and Windows Media Player) and Microsoft PowerPoint via a Bluetooth enabled mobile device or an infrared remote control. Vectir can also control various other settings of the operating system like keyboard, move mouse pointer, change volume, computer restart and shutdown etc. 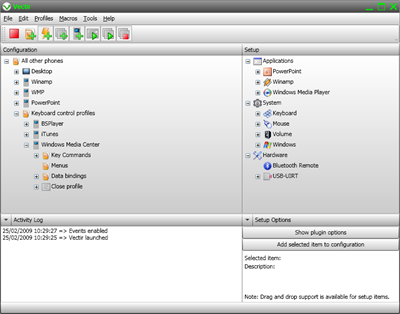 Like any remote control software, Vectir essentially consist of a server end which is to be installed on the PC and a client end which is required to be installed on the cell phone. The cell phone should support the Java platform. All S60 symbian devices should be capable of running Vectir, according to their website. They also have compatibility list consisting of devices they have been successfully tested.

Though they have detailed the setup procedure on their site, I’m having a hard time figuring out certain steps. Some of the screenshots they show are entirely different from what it actually appears. For example, where the hell is the “Profile” tab and it’s settings in the Bluetooth server plug-in setup?

Anyway, if you have better luck then me then you can do a whole lot of things with your cell phone. Several default profiles already come installed along with the software. All actions are configurable and key bindings can be changed. The beta version of Vectir even supports creation of macros, controlling the PC keyboard, sending text from the PC to the phone and triggering the Alt+tab shortcut to juggle between open windows from the cell phone. Sounds great, only if I could make it work.