Blaze is a an open source application for Windows that can be best described as your personal desktop assistant. It has a remarkable feature of always being aware of what you are doing and using that information to help you do your daily tasks. Blaze can be used in several different ways.

As an application launcher

Blaze functions as an application launcher. Now we have seen more than a couple of programs of this kind in the past. Blaze automatically indexes all your applications and all recently accessed files and folders. By default, Blaze only indexes your start menu shortcuts and the program files directory but you can make it index any directory on your hard disk. After it successfully builds up it’s index you just have to type the first few characters of the program you want to launch and it immediately finds the correct program.

But there is more to Blaze’s application launcher. Blaze has the ability to bear typos and, therefore, you don’t have to be so careful while typing a command. You can also type program names in shortcut, and it almost always recognizes what you are trying to access. For instance, you can just type “wrd” and it will open Microsoft Word.

As a task automater

Blaze can automate small repetitive tasks. As I said earlier, Blaze has the ability of being aware of what you are doing. It runs in the background and whenever it detects a repetitive action, it offers to complete the task for you. You don’t have to teach him a thing. Blaze learns by itself and offers suggestions on his own. You just have to choose whether to accept its help or not.

For example, say you want to rename a few photos. After you rename the first few photos, Blaze will detect what you are doing and offer a suggestion such as this. 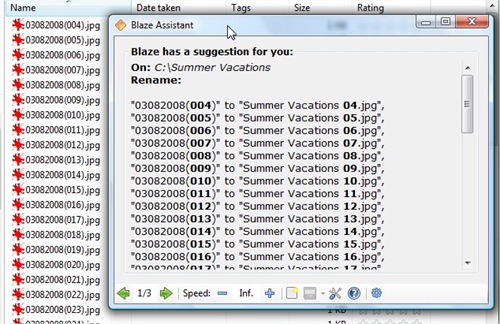 Blaze’s Assistant doesn’t always get it right. Occasionally it would confuse or come up with some idiotic suggestions, like one time I deleted a few files from the desktop when Blaze Assistant suggested I should delete the rest of the files from the desktop too. Another time, out of the blue, it told me I should delete the entire contents inside the “Opera” directory including .ini and .dat files.

As a macro recorder

Blaze is what they call an “Adaptive Macro Recorder”. Regular macros consist of strict input sequences that can’t adapt to new situations. Image that you recorded a regular macro in which you accessed some menus in a window, using mouse clicks. If you move the window to another position and you reproduce the recorded macro, you will notice that the mouse clicks will just miss their target.

Blaze has the ability to record Adaptive Macros, which are macros that can adapt to new window positions. To launch the macro recorder, type “Record Macro” on Blaze and start performing your actions. Once you are finished, you just have to invoke Blaze, by pressing Ctrl + Alt + Space, in order to stop the macro recording. Then, you can give a name to your newly created macro and save it.

To invoke your created macro, just type on Blaze the name you assigned to it and
press Enter.

Blaze supports number of plug-ins which can be edited to change their functionality. Features such as calculator, web search, email sender are available as plug-ins. Blaze also supports a handful of native commands that can do various other things like showing your IP address, killing processes by name, showing customized message box etc.