Still using that bloated iTunes to transfer music back and forth between handheld devices and the computer? Do your computer a favor, just get rid of it. Believe me, there is no dearth of software with the same capabilities as iTunes have and more. Now a Finnish startup, Linkotec, is challenging iTunes’ dominance by launching a web based solution called Dazzboard that has all the goodness of iTunes but without the disadvantages of Apple’s closed environment.

Dazzboard is already a couple of months old and making steady progress. Initially released as closed beta in July (it’s open now), Dazzboard was quick to release a Facebook app and iGoogle widget. 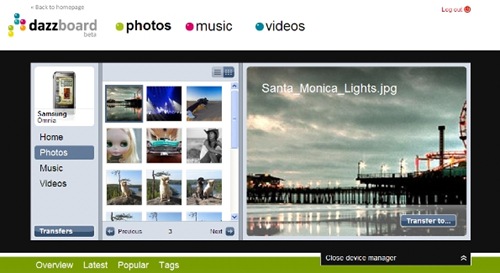 So what exactly is Dazzboard? Dazzboard is a web based service that allows anyone to transfer their media files like videos, music and photos from their phone to their PC and vice-versa. It also lets you share your files on the web by uploading it to Facebook, Flickr, and YouTube. Dazzboard recognizes and supports more than 100 different mobile phones and music players.

Dazzboard works through a browser plug-in for IE and Firefox on Windows XP, Vista, and Windows 7 PCs. Once the plug-in is installed, fire up your browser, open Dazzboard’s device manager and plug in your portable device. After that it functions just like any file-transfer software. Additionally, you can upload your files directly to online service as mentioned before, from Dazzboard’s interface. 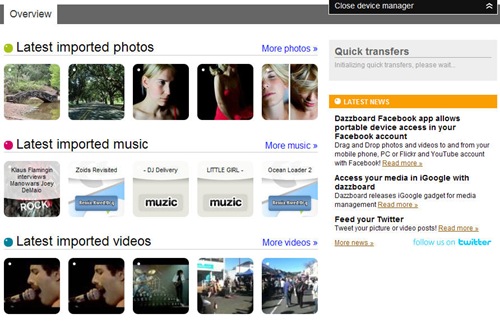 Recently Dazzboard teamed up with MySites, a web-based service offering an unlimited amount of cloud storage. The MySites web service provides you with a custom URL (yourname.mysites.com), privacy control features, an RSS feed, and a multi-file upload option for sharing several files at once. After uploading your media, your page will feature the files and links to download and you also have the option to share the files using embed codes or on Facebook, Twitter and social bookmarking services like Delicious, Digg, Google and Reddit. It even has mobile QR codes.

Incredulously, MySites is a free service with no upload limit, no file size limit, no resizing of the original file, no download limits, no speed limits, no nag screens, and no watermarking. You can play your content right from MySites or use it store files and save it with your peers.

Dazzboard currently doesn’t have any iPhone application, nor does it support iPods. They are clearly staying away from Apple devices and instead focusing on the millions of mobile phone users that still use non-Apple based devices