Probably the earliest depiction of a communication device resembling a laptop has been discovered in an ancient Flash Gordon Comics by a certain Mr Mende Petreski of the Republic of Macedonia. Mr Petreski was browsing through his comics collection when he stumbled upon a drawing of a familiar form in a panel in Politikin Zabavnik weekly published June 14, 1974. The sketch shows the forces of Ming the Merciless, using a device which resembles a lot like a laptop, to talk to their leader. 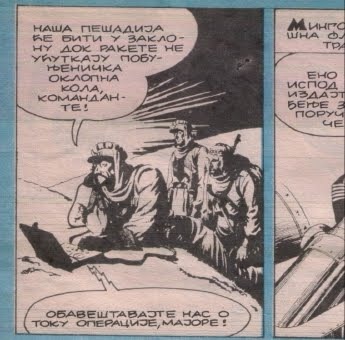 Translation: "Our infantry will stay in the cover until the rockets silence the rebel armored cars, commander" – "Keep us posted about the flow of the operation, Major!"

This particular comic strip represents a Serbian translation of an episode drawn around 1937 by Alex Raymond. The device depicted in the comic is termed “spacephone” which is described as a "communication device used on Mongo," a rogue planet that travels through our solar system under the control of its dictator, Emperor Ming. The device even has a keyboard like thing which “the Merciless” is using to operate the device. And isn’t that small object protruding from the lid a webcam?

A couple of scans from this comic book featuring the world’s first “laptop” are available at this Flickr page, courtesy of Mr. Mende Petreski.

If Alex Raymond had been alive today, he sure would have been amused.